Like a “Tale of Two Cities” the US Golf Industry, at least when measured by rounds played, is heading in two opposite directions, with low precipitation and relatively mild temperatures for the Northern tier and Southeastern Region bolstering rounds thru February, while the West and Southwest have been pounded by cooler than normal temps and heavy precip, meaning a significant decline.  In total, rounds played are up 2.6% thru February (+5.2% in January, +0.6% in February), a good start to the year, but there’s still a long way to go, and as can be seen in the map below, Mother Nature can have a substantial positive or negative impact. 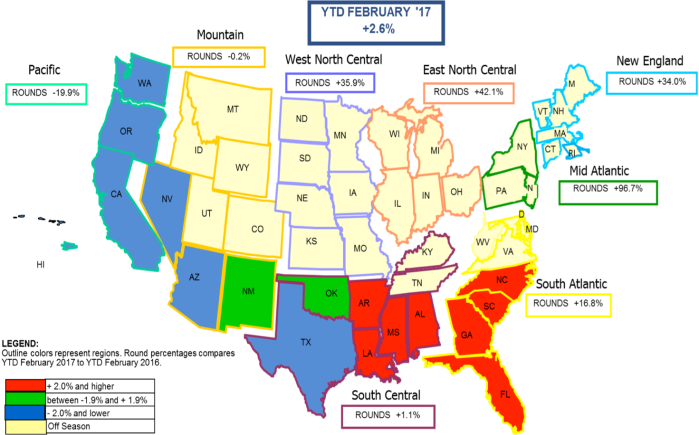 The map above shows how Year to Date rounds played have fared thru February 2017 vs. same period 2016.  The vast majority of the country remains “white”, indicating states that are typically “out of season” in January and February, however when one looks at the “% change” in these regions they are soaring, albeit off a small base, with the Mid Atlantic nearly doubling last year’s level, the East North Central up 42%, and New England increasing by 34%.

Looking at Regions/States that are in season, where one would typically see a significant number of rounds played, the South Atlantic soared, up almost 17%, while the West Region, which is also significant at this time of year was down 20%, as California, Oregon and Washington were lashed with the combination of rain and cooler temps that severely impacted golfers plans to play.

The two other significant Regions, the Mountain (-0.2%), which is dominated at this time of year by golf in Arizona, and the South Central (+1.1%), split between positive rounds in Arkansas, Louisiana, Mississippi and Alabama, were offset by declines in Texas, were both on par with prior year.